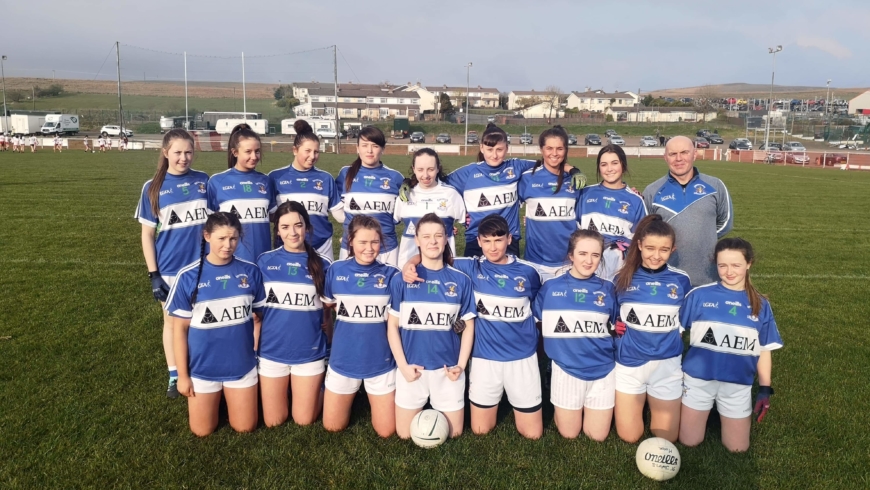 U14s have went off to a flying start this year with a squad of 23 girls training and playing weekly. They fought their hardest battle in horrendous conditions v ConMagees in Glenravel in their first match of the league being beaten by only 2 points. Their second game however showed the true quality of football within the group and they ran away with their first win of the year against a talented Rossa side. Nothing but grit and determination in this bunch and hopefully it makes for a successful year for all involved.

Newly formed u6 girls have had a fantastic time in their new group. Great numbers every week, with all girls participating in both Camogie and Ladies football every Saturday morning. We just had our first tournament hosted by ourselves and all the girls and mentors had a great morning with lots of fun, laughs and new friendships made. All round fab bunch of girls with lots of talent and a bright future ahead of them!

The U16’s played their first game of the season against St Enda’s up in Hightown, they  travelled up with a panel of 25 and the management team of Ciaran and Martin used the opportunity to play people in different positions and  give everyone a game.

The U8’s and U10’s coached by Laura and Jeanette have been training away and participating in numerous blitzes in the the last few weeks.

The U12’s are a very young side, playing in a very competitive league and are gaining confidence under the guidance of Claire and David Reynolds.

The biggest success  to date this season is the active participation of a number of our players taking up coaching roles within the teams. Siantelle Boyd,Rachel Mc Grath, Niamh Mc Ardle, Eireann Boyd, Ceara Carleton, Erin Mc Greevy, Tierna Bell and Carol Browne have all stepped in to help with the juvenile teams.

The downside of the year has been the loss of our Senior team. Due to lack of numbers, we were left with no other option  but to withdraw from Div 1 for the year and sanction the remaining members out to other clubs.

Going forward, we have a very strong group coming through from u16 and minors to bolster the present members of the senior panel for the 2020 campaign.

The Minors got their campaign of to a winning start against Lamh Dhearg up at  Hannahstown on Friday evening and hopefully it will continue throughout the season.

The U16’s and Minors took a break from training and went paint balling alongside mentors and parents.

We used this oppotunity to do some team building and finished the day off with pizza back at the club followed by the presentation of league medals to last years successful  minor team.

A brilliant day all round and hopefully we can build on it throughout the year.