Home / Camogs back to winning ways

Camogs back to winning ways 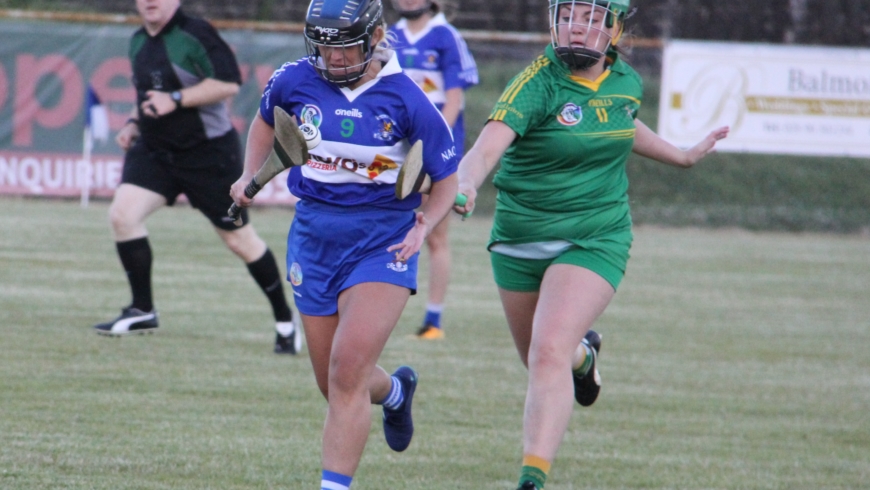 Following last week’s heavy defeat at the hands of Loughgiel St. John’s resurfaced in determined mood and took the battle to Dunloy from the throw-in. Máire Mulholland converted an early free after Eimhear Costello was brought down on a promising solo run and then added a second free a few moments later. Hannagh McGuigan took a fine point from play before Dunloy finally got an attack launched and Luanne Smyth put over a well struck point. St. John’s defended well as Dunloy, never to be taken lightly, tried to add to their tally and there were a few anxious moments, but Sinéad Lagan in nets and a solid backline of Byrne, Clarke-Jones and Richmond kept them at bay.

St. John’s soon regained control as a long ball up field found Costello who made a great cross field pass to Olivia Morgan, who smashed home a goal. A few moments later quick thinking from Nicole Kane, now back after injury against Cargin, led to another St. John’s goal which was converted by Mulholland. St. John’s speedy  forward  Laura Ferris was forced to leave the field at this point but   Mulholland , in sparkling form, added to her tally a few seconds later from play before the excellent  Aideen Quinn tapped home a close range goal to leave a half time score of St. John’s 3-04 Dunloy 0-01

The second half saw a welcome Naomh Eoin return for Helen Mead and Ashling Hawkins for the first time this season and both players scored points from play to herald their return.  Katie Devlin also came on to give a hard-working defensive performance. Máire Mulholland expertly converted two consecutive frees following a brace of fouls on Eimhear Costello who was proving difficult for Dunloy to handle. A couple of Dunloy defenders and one St. John’s player were booked as the game reached its climax and late goals from Máire Mulholland and a second from Olivia Morgan sealed the win despite a late free converted for Dunloy by Lauren Elliot. This was clearly a below par performance from Dunloy as the corresponding fixture in Dunloy was a close drawn game a month ago but St. John’s will feel good about their victory with more players returning to the squad ahead of championship.