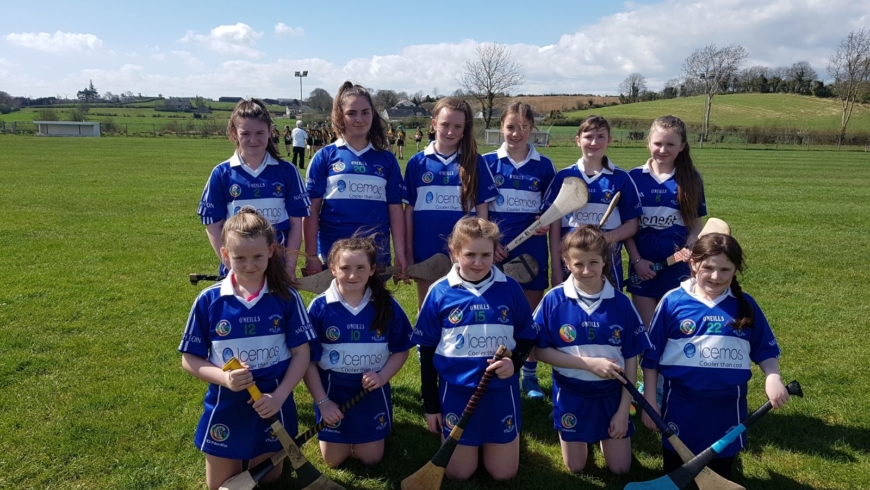 The U14 Féile camogie blitz today was a great experience for the girls. Unfortunately, we didnt win any of our games but its evident from the sideline that the girls are improving greatly.

We improved with every game with some great defending and link ups. We were hesitant to start with in our first game and there was a lot of pressure on the backs but the girls became more comfortable as the games went on to play their own game.

Some great courage shown by wee Meave and Emma who were out after every ball and involved in some super tackling. Maura was consistently tough throughout the day in tackles and later in the games gaining confidence to go herself lifting and striking the ball great to see improvement.
Great catches from Éadaoin and Sinead and both players did super at bursting through tackles once on the ball.

Sophie and Claddagh made some great attacking play pushing the ball up the field and taking on players, both players also covered alot of ground and worked back a number of times to help great teamplay.

With 4 games played and every player improving with each game it was hard to pick a stand out player in each but some girls deserve a special mention for the amount of workrate, effort and improvement shown for the duration of the tournament.

Scarlett Murray. ? Scarlet has improved immensely over the past few months and this is due to her dedication and desire to play. It was obvious as a spectator that scarlet wanted everyball that came her way. She was super at lifting taking on players and striking the ball which is exactly what was asked of her. Well done scarlet for the great effort you continue to give.

Meabh McGurk ?. Again another player who has come soo far already this season. As an older u14 player meabh stood up and showed the younger girls exactly how we want them to play. She was as solid as a rock in defence all day even stepping in to goals for one game and excelled. Her reaction time is excellent and saved us on a number of occasions. Great blocks were made by her and she was coming out of tackles with the ball in her hand in a way that any senior player would be proud of. Well done meabh ! solid as a rock all day.

Carla Hamill ?A player that didnt stop working all day. Carla made run after run out of defence and pushed the play up the field. A great attacking player. Carlas movement off the ball and reading of the game was also super as she was under every dropping ball. Some great link ups with sophie and sinead also great team player. Well done as always carla.

Clodagh Thompson ? From playing solid in defence at the start off the blitz to making great attacks in forwards in later games Clodagh was super and gave 100%. She has a great strike and in very strong in tackles clearling super balls down the line. Her work rate was super and she was a great example to the younger girls. Maith an chailín clodagh.

Well done to all girls great effort today regardless of the scores the heads never dropped and the girls seemed to enjoy the day. The Blitz was a useful experience. One area for improvement would be free taking ! lol ! can we all please have them practise their frees as they will all be expected to take them in games. GRMA a thuismitheoiri ?