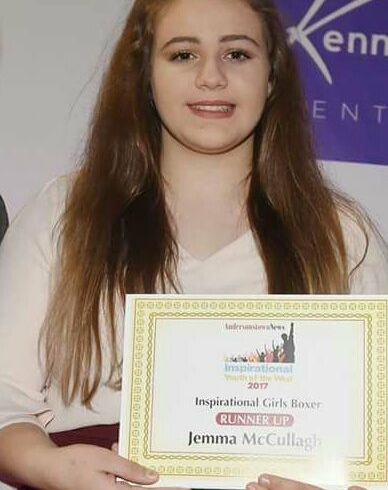 First up, Toni Leigh Finnegan collected the award for Inspirational Gaelic Footballer in recognition of her brilliant displays for our U16 and senior teams. We also had a runner-up in this category with Rebecca Crummey Nominated for her displays on the pitch and for her involvement in juvenile coaching.

Next we had Niamh Hamill awarded the Inspirational Camóg award for her dedication to club and county at U14 and U16.

Continuing the sporting theme Jemma McCullagh was pipped at the post for Inspirational boxer. Jemma plays both U14 and U16 camogie and football for Naomh Eoin as well as the boxing and gives 100% effort in all of them.

Finally, another of our recent U16 players, Anna Rosbotham collected the Inspirational Singer award, an excellent example of achievement and proof of the contribution our youth make to our local community.

Well done to all the award winners and nominees. The Naomh Eoin family is immensely proud of all your efforts!