Footballers march on to county final! 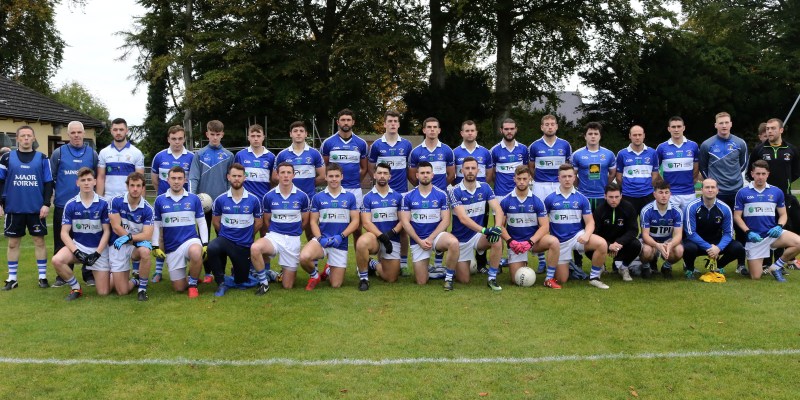 Naomh Eoin senior footballers finally made it over the line against reigning county champions Cargin after 2 epic semi-final games, the second of which included extra time. In truth, there was nothing between the 2 sides, but the Johnnies resilience and ability to find that extra gear after after nearly 80 minutes at Glenavy proved to be the difference.

This replay was as cagey as the first game, with both sides having periods of dominance, but when the Naomh Eoin men raced 3 points clear with 2 to go we hoped we had finally put the Toome men to the sword. Not to be however, as Cargin roared back to equalise in the 5th minute of injury time to set up another 20 minutes of nail-biting drama for the sizable Johnnies support!

With players from both teams feeling the effects of 2 hard-fought games and succumbing to cramp, our ability to bring on fresh legs without disrupting our gameplan or patterns ultimately won the game for us. The resolute defence that served us so well remained sound in the 2nd period of extra time and enabled us to hit Cargin on the break, eventually moving us into an unassailable position at the end.

This was a magnificent team performance with the importance of strength in depth becoming apparent in the latter stages when we called upon the lads on the bench to keep the momentum. Every single player gave 100% over the 2 games and will look forward to the final, safe in the knowledge that they are more than a match for anyone in the county.

We now move on to the final on Sunday with confidence that we can get the result that our efforts deserve. So all roads lead once again to Glenavy (3.15pm) where our match-up with Lamh Dhearg awaits. Make sure you get there early to cheer the lads on to the pitch with a sea of blue and white!!