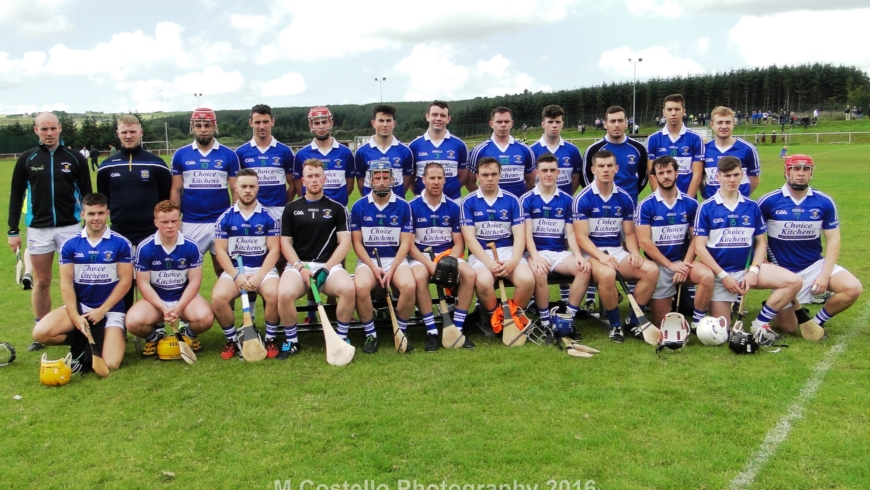 Naomh Eoin senior hurlers came within a whisker of causing advancing to the semi-final of the championship today, eventually losing by 4 points in a match in which they were the better team for long periods.

Ultimately, the game turned on 2 refereeing decisions in the 12th minute of the second half, with referee Cunning deeming it necessary to issue a second yellow to Jim Peoples for what most people saw as an innocuous challenge at most, and compounding this error by also sending Gerard Cunningham to the line, presumably for questioning his decision.  In effect, these decisions not only gave the Johnnies lads a mountain to climb, despite being deservedly 2 up at that stage, but succeeded in ruining what, up to then, had been an enjoyable game.

Credit to the Naomh Eoin lads though, as despite this double setback, they managed to retain the lead until finally conceding a deflected goal in the last minute of normal time, the Rossa numerical advantage taking its toll.

In a cagey first half, the defining moment came in the 25th minute when CJ McKenna expertly finished a Peter McCallin pass for the game’s first goal.  Up until then, the sides had matched each other point for point – the majority of Rossa’s coming from placed balls – with some excellent finishes from Bradley, Dudley and McKenna.  Indeed, despite being pitched into their first senior championship game, minors Carson, McKenna and McCallin certainly were not awed by the occasion with the Whiterock men going in at the break in front on a scoreline of 1-13 to 0-13.

Rossa narrowed the gap to a minimum on the resumption but Michael Bradley got us back on track, converting some hard-earned frees. Up by 4 points at one stage, the ‘upset’ did look to be on until the disputed sendings-off. Even then, the 13 lads remaining on the pitch dug deep to limit the Rossa opportunities until that deflected goal put the tie beyond them.

Immense credit to the John, Jimmy, Gerard, Gerry and the lads who produced a performance that belied a trying league campaign, notable for the unavailability of a number of key panel members for various reasons. Going into the game not many would have anticipated a victory but fair play to the lads for putting in a performance that may well have gotten us over the line but for the dismissals.

Harder work to come for the squad as they prepare for the 2017 league campaign. First up for all of them – and for all club members – will be the Hurling Development Forum in Corrigan on Tuesday 6th September. We need everybody’s input so make sure you’re there…