By conor Sun 1st May 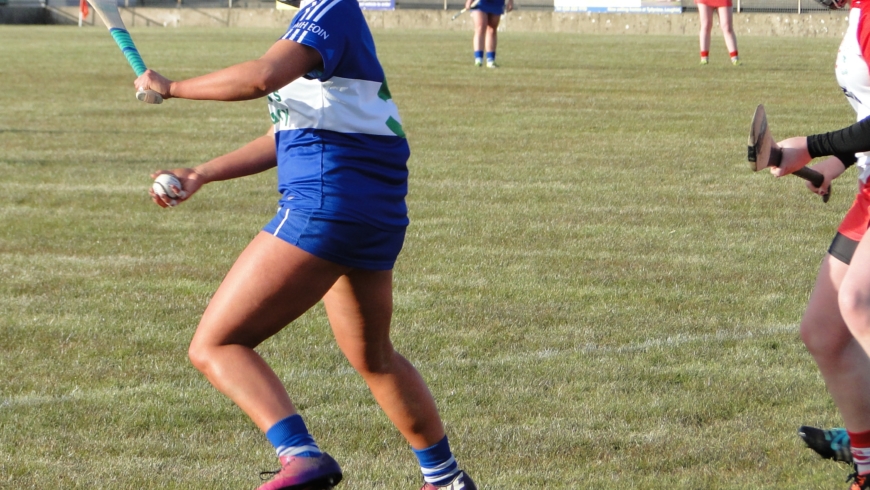 On a cold night when camogie games were postponed in Glenravel and Ballycastle, St.Johns braved the elements and travelled to Loughgiel where conditions turned out to be excellent for a game.  Travelling with only 17 players including a number of under 16’s was a cause for concern ,especially when talented half forward Nicole Kane was forced off after 10 minutes with a recurrence of an ankle injury and corner forward Dolores McGuigan had to retire with a hamstring problem before half time, but more than adequate young replacements  Faoileann Leyden and Róise Webb took to the field to uphold the honour of Naomh Eoin and excelled themselves for the rest of the evening.

In a tightly contested, low scoring game St. Johns drew first blood through Hannagh McGuigan with a well taken point and the youngster added a goal before the interval to show her consistency by scoring in every game this season so far. The ever dangerous Maedhbh McCormick took the home team’s only first half point to leave a half time score of Loughgiel 0-01 Naomh Eoin 1-01 with everything to play for in the second half for both teams.

The second half introduction by Loughgiel of senior county starlet Chloe Higgins to the midfield made a substantial difference to the balance of the game and she fought a running battle with  Eimhear Costello and  Helen Wilson throughout the second half assisted by Finvola McVeigh and Megan Boyle in a game that became more exciting by the minute. Loughgiel  soon  drew level after a period of sustained pressure with the elegant Cara McIntyre scrambling home a goal, but a Maédhbh Laverty point nudged St.Johns ahead again before Megan Boyle levelled things for a second time with a neat point. St. johns responded by  laying  siege to the Loughgiel  square and  the baby faced assassin, Córa Weir, who has been marked very well by Maria Lynn all night, finally shook off her marker and hammered home a decisive goal.

The ubiquitous  Laverty added another point to her tally shortly after this and despite a firm push  and two late points ,loughgiel  lost by two  as referee Owen Elliot ended the game . This was a deserved win and a very impressive team effort from St.Johns with  every camóg playing her part to make it three out of three wins for Naomh Eoin despite some notable absentees. Úna Simpson ,Aileen Fox and Emma McErlean deserve a special mention for their defensive diligence throughout the game. As usual, Loughgiel played to a high standard with skilful, highly committed players in every position.

Next for Naomh Eoin is their  third away game out of four fixtures when they visit Portglenone next week. We may be running  short of diesel but not spirit!