Home / Camogs advance in U14 Championship

Camogs advance in U14 Championship 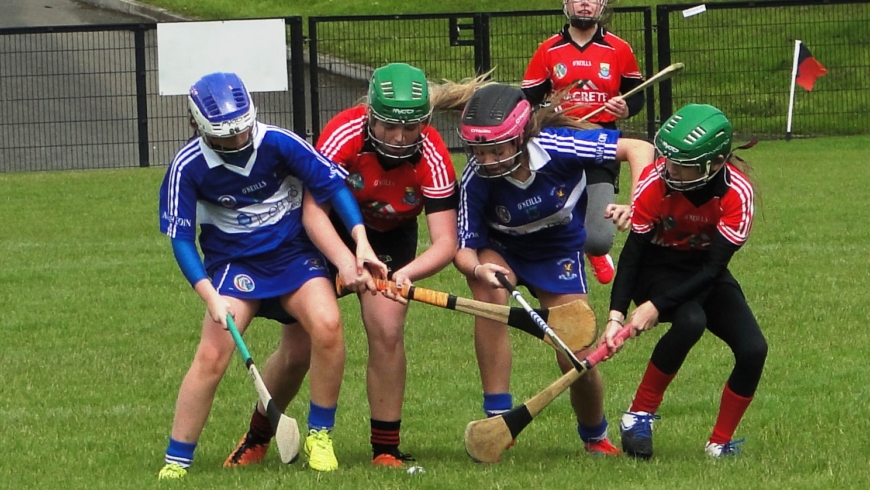 Eyes on the ball!

These lucky camógs avoided the rain at Ahoghill on the first day of championship but a stiff breeze was in evidence which Ahoghill elected to play against in the first half. There were a few tense midfield tussles before the scoring opened with  Natasha Clarke pointing for the visitors. Within a short time Éireann Boyd slammed home a close range goal before Katie Connolly fired wide thanks to the close attentions of Ahoghill defender Mairead McCloskey who had a great game at the heart of her defence.

The visitors seemed to camp themselves in the Ahoghill half of the pitch and managed two more goals from Eimear Carson and Niamh Hamill  plus a Clarke point before a rare Ahoghill breakaway caught the St.Johns defence napping and Aine Graham forced home a goal to give the home side hopes  of a revival. This was short lived however as a red hot Niamh Hamill completed a hat-trick of goals by halftime and the skilful Clarke added another point.  H/T Ahoghill 1-00  St.Johns 5-03

The second half followed the same pattern with Ahoghill  fighting hard and never giving up but struggling to contain the visitors who chalked up  three more goals including yet another from Niamh Hamill and two late goals from substitute Anna McCaffrey, plus points from Hamill and Éireann Boyd.

This was a comprehensive win for the Corrigan park camógs by 8-05 to 1-00 and the match was refereed very well by Antrim senior camogie star Emma McMullan who will now surely consider a career as a Réiteoir  when she finally hangs up her skort.