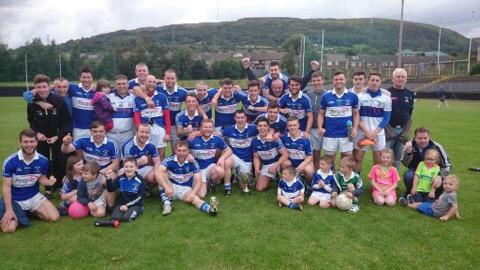 Naomh Eoin reserve footballers regained the championship in style on Saturday night with thoroughly professional performance against a strong Lamh Dhearg side.

Fielding with the right blend of youth and experience, the Johnnies lads got out of the traps faster than their opponents, always leading and never likely to get caught on the scoreboard from the first minute when Gary Rafferty tagged on his point of many.

In may have take us until 5 minutes into the 2nd half to land the killer blow through a Locky McCurdy goal but we were always able to maintain the breathing space of a goal between the sides.

Highlight of the night was a massive 1-1 from Kevin McGlinchey – although the goal was an OG at the death! – but we had stars all over the field.

Donnelly was assured in goal.  McCurdy, the Garlands, Hannigan, Kearney and Clarke in defence limited the chances of the Hannahstown attack very effectively and the evergreen duo of McGlinchey and Millar in midfield won the lion’s share of possession.

Rafferty top scored from play and frees, ably supported by Press, McEvoy, McGowan, goal scorer McCurdy and inspirational captain Duignan, who didn’t need the interpreter for the speech after all:)

Always good to get a bit of silverware…the hope is that a lot of this team will continue to push for greater things in the senior championship.