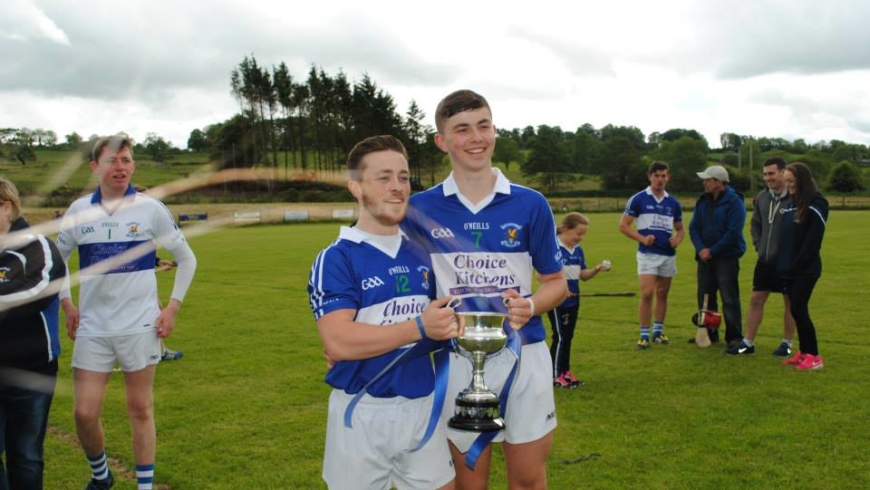 Naomh Eoin U21s regained the Neilly Patterson Cup on Sunday after a hard-fought victory over Cushendall at Ballymena and despite a sluggish start that saw us 7 points in arrears after 20 minutes.

The game started at a hectic pace, with Cushendall using the wind advantage to good effect, converting a number of frees that resulted from continued pressure.  Naomh Eoin’s sole point at this stage was a Conor Johnston free.  However, the St. John’s lads, slowly got back into the game and the more direct balls into Peter McCallin, Conor Johnston, CJ Mc Kenna and Fergal Morgan began to pay dividends.  With the half-back line of Domhnall Moran, Domhnall Nugent and Conor Carson gradually getting on top, the Cushendall opportunities were also reduced greatly in the 2nd quarter.

With the score sitting at 0-8 to 0-2 and 22 minutes on the clock, Conor was hauled down in the square, the resultant penalty from Ciaran Johnston giving the Dall keeper no chance.  This galvanised the Naomh Eoin men and they finished out the half strongly, adding on another 2 scores to leave the half time score 0-8 to 1-4 in Ruairi Og’s favour.

Any notion that the wind alone would win us the game were dispelled fairly quickly on the resumption.  After a mix-up in defence, Cushendall took advantage to score a goal that out them 4 in front.  However, the Johnnies calmly got themselves back into their stride with the input of Ciaran Johnston and Michial Dudley driving thenm on, and managed to peg Cushendall back through a series of Conor Johnston points from frees and play.

Substitute Jude McCurdy added to the total with a fine solo effort and going into the last 5 we led by 3 points.  Mick Bradley and Donal Carson got more into the game at this stage and made sure nothing got out of the Cushendall defence easily.

Cushendall managed to get back to within a point but further pressure on their rearguard resulted in a further 2 frees converted by Conor Johnston.  The Dall men tried in vain for a goal at this stage but the full-back line of Conor McEvoy, Ryan McNulty and Odhran McKenna held firm and made sure the steady John Darragh in goal didn’t concede another.

This was a brilliant team performance and a fitting reward for the effort put in by the panel.  The lads will no doubt drive on from here and continue their quest for success in the senior ranks!