By conor Mon 18th May 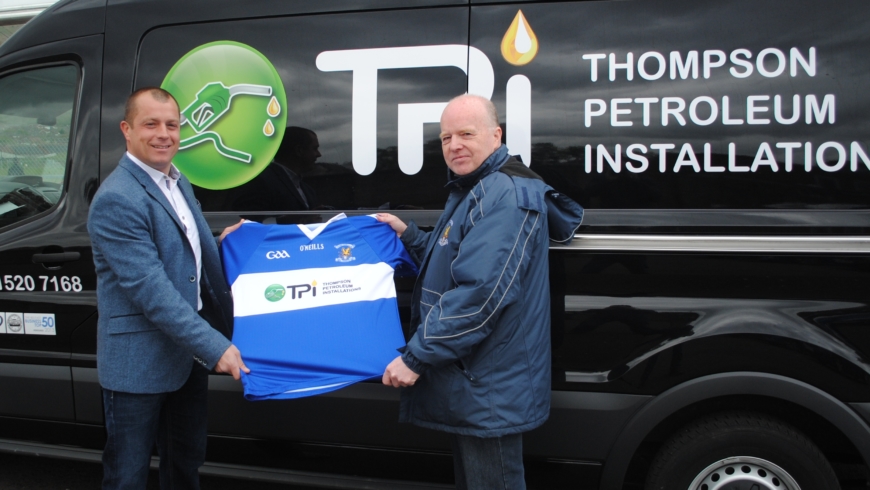 Naomh Eoin secretary, Jim Donnelly, accepting a new set of jerseys from Colin Thompson of TPI for their continued sponsorship of the senior footballers.

It’s not too often you get to report on the Naomh Eoin senior football team scoring 7 goals in a league encounter – and not too many old hands could remember us doing this in the recent past – but yesterday’s emphatic victory over Aldergrove gives us just such an opportunity.

The majors came from Adrian Oliver from play and penalty, Domhnall Nugent, McNulty, Fitzy and McDonagh but the feature of this game was the team play and tackling that provided the platform for the goals and the victory.  Padraig Nugent in goal had very little to do all day thanks to the efforts of Dougy, Kevin Cut and Anto Press in the full back line.  The half-back line of the Hannigan boys and McNulty combined defence and attack well, while the midfield duo of Nugent and McDonagh covered every blade of grass.

The half-forward line of McBride, Fitzy and Peden ran their markers ragged all day, their movement creating the space and the chances for a full-forward line led superbly by Oliver and ably assisted by Tierney and McCurdy.

McEvoy, McCafferty and McCrudden slotted in seamlessly when introduced in the 2nd half, with the panel looking forward to their next game against Hannahstown on  Wednesday night (6.45/8pm at Hannhstown).

The reserve team had another comfortable victory over the same opposition with the mainstays of Hand and Kearney leading the troops well.