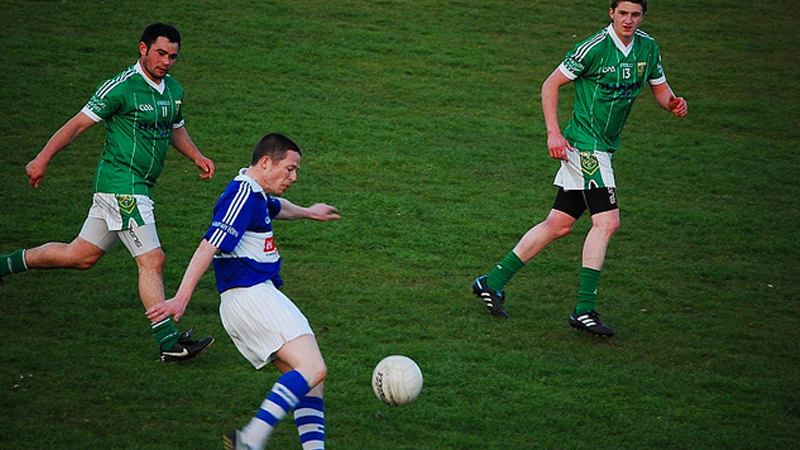 Naomh Eoin U21 footballers were crowned county champions yesterday after an at times nervy, but ultimately well deserved victory over Lamh Dhearg.

The Johnnies lads get off to a flier in the first half with goals from Matthew Fitzpatrick and Conor Johnston, but allowed the Hannahstown men back into it in the run up to the break to go in only 2 points up.  When the lads played direct ball into the forwards, the Lamh Dhearg rear guard had no answer to it.  Indeed, the game could have been over as contest by the 20th minute if Fitzpatrick had more luck with a number goal chances.

For most of the 2nd half the sides matched each other point for point until the last 5 when Naomh Eoin’s superior fitness and organisation began to tell.  Our defence, superbly marshalled by Ciaran Johnston and Jack Hannigan, were able to limit the Hannahstown men to long range efforts while Nugent, Peden, Garland and Dudley ensured lamh Dhearg were never able to threaten McKenna in goal.

When we reverted to the more direct style in the closing stages, Lamh Dherag had no answer to Paddy McBride, Conor Johnston, Fitzpatrick and Donal Carson.  Mick Bradley put in a great shift in support of Ronan McCafferty and Ryan McNulty in the middle, while Locky and replacement Fergal Morgan were always available for the out ball from defence.

The 5 point victory in the end did not flatter the johnnies lads.  Their greater work rate and support play at crucial times was the difference and but for the display by the Hannahstown number 1, the large crowd of Naomh Eoin supporters wouldn’t have been biting their nails till the end!

Congratulations to all the panel and to Paddy and his management team.  A great way to end the season for the club!

Photos can be viewed in the gallery section.