ST JOHN’S U16 LADIES FOOTBALLERS WIN ANTRIM U16 B CHAMPIONSHIP. 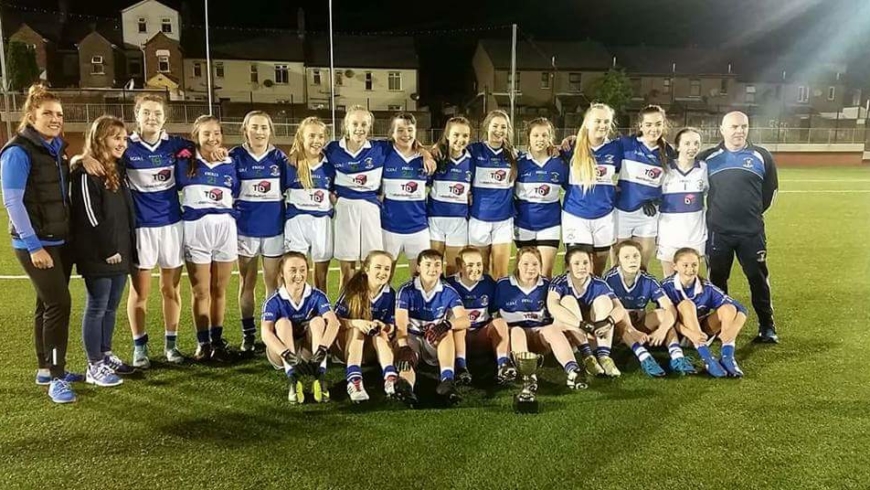 CONGRATULATIONS TO ST JOHN’S U16 LADIES FOOTBALLERS ON WINNING ANTRIM U16 B CHAMPIONSHIP.

What a year it’s been for this fine bunch of footballers, having struggled to field early on in the season due to exams and other commitments. The girls finally got their exams finished and started to concentrate on their football. We introduced a number of new girls to the panel and what an impact they have made, thanks to the introduction and coaching from Ciaran Boyd & Martin Crummey.

Leah McAuley, Erin McGreevey & Teirna  Bell only took up Ladies Gaelic football this year and have flourished into excellent footballers , we also had Toni leigh Finnegan, Ainerois McKenna, Alex Trainor & Shauna Moyes come on board with everyone of them making an immediate impact to the team with their style of play and commitment to the panel, add them to our established members of the panel and we have an excellent group of girls that has challenged and beat some of the best teams in the County.

Laura and I cannot thank all of the St John’s girls enough for the brand of football they have been playing, recently winning plaudits from supporters, mentors and other clubs throughout Antrim.

At the start of the championship campaign we had a tricky away game against last year’s winners Naomh Brid. The St John’s girls got off to a flyer with a number of quick scores helping to ease the championship nerves; they kept their structure and withheld a late rally by Naomh Brid to go on and win the game.

The quarter final was an away game against Glenavy, once again the girls hit them with a few quick scores and took a commanding lead throughout the game and came away convincing winners.

The Semi-final was another away game, this time to St Galls. The Milltown girls put in a valiant effort against St Johns but could not match our defence, strike force and pace.

The St John’s girls went into the final brimming with confidence and ready for the task ahead.

Cheered on by a big travelling support they took on a strong Sarsfields team.

Sarsfields racked up the first couple of scores but failed to rattle our girls’ game plan, with a solid defence of Maedbh Fennell in goal and back line of Niamh Hamill, Ceara Carleton, Siantelle Boyd, Clodagh Mc Curdy, Niamh McArdle and Ainerois McKenna, the girls soon shut down and minimised the Sarsfields attack.

Both Carol Brown and Eireann Boyd had outstanding games in midfield -battling hard, tracking back when required and driving forward on the attack.

The forward line of Rebecca Crummey , Natasha Clarke, Erin McGreevey, Alex  Trainor, Toni Leigh Finnegan and Teirna Bell were flying and worked well as an attacking force: preventing opposition attacks and racked up the a number of excellent unanswered  scores.

Going in at half time the St Johns’ girls had built up an impressive lead and they knew the trophy was in touching distance.

When the second half started the girls were a bit slow to find their rhythm due to the intensity and pace of the play in the first half, with the introduction of Leah McAuley, Shauna Moyes, Sadbh Thompson, Aifa Gough and Rachel McGrath, the girls soon established their authority on the game and kept the Sarsfields attack to a minimum and racked up a number of excellent scores.

As the final whistle beckoned the St John’s girls had established a very comprehensive lead and ran out comfortable winners in the end.

Both teams served up an excellent game of football that was widely appreciated by both sets of supporters and the County secretary, stating that it was the best game he has witnessed this season.

In all honesty, it’s nearly impossible to pick one girl who stood out among this great panel but for sheer commitment, driving forward and tracking back on the night it had to be Natasha Clarke.

There is a lot more to come from these girls with 18 members of the panel still a part of u16 next season.