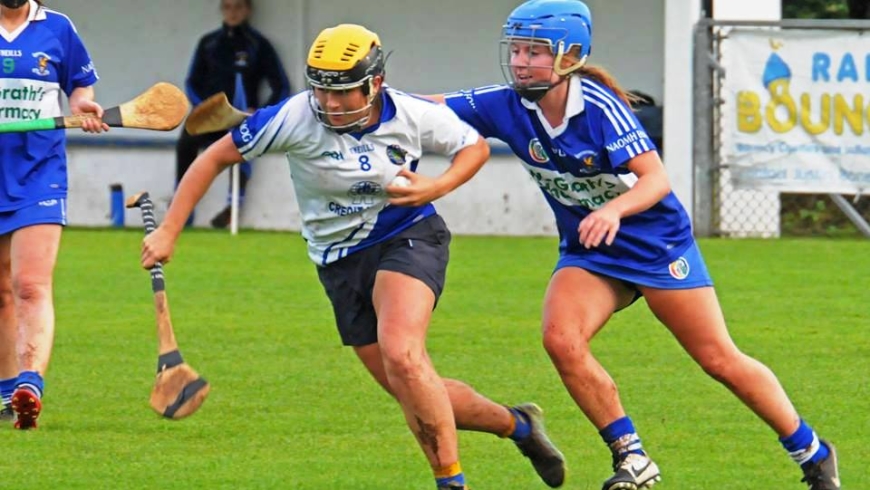 Tír na nÓg were big favourites  to lift the shield going into this final  with home advantage and having defeated St.Johns in both league meetings this season but it turned out to be a close and very intense battle on a wet and heavy pitch which is normally perfect. Referee Vincent Boyle initially expressed concerns to both managers about the state of the pitch but proceeded with caution, making generous allowance for some physical challenges on both sides, due to the difficult underfoot conditions.

St.Johns were missing Carrie-Anne Fitzsimmons, Michaela Fegan, Leona Johnston and Laura Ferris who have featured in every game recently and  to make up a full team brought in two players, Sinéad Lagan and Aishling Hawkins ,who last featured for the club in the 2016 Ulster Junior final. Tír na nÓg played Aimee McAtamney in nets carrying a leg injury so both teams had starting issues before the game.

Tír na nÓg opened the scoring with  a pointed free from Aine Devlin and a fine point from play via the stick of Caitlin McGaughey  but St. Johns Maédhbh Laverty levelled the scores with two successive points from play. further points were exchanged in a close battle as the speedy  Emily Falloon nudged the home side ahead only for Aishling Hawkins  to take two quick points from play.   Aine Devlin quickly responded for Tír na nÓg  taking  advantage of a misdirected puck out to level the game for the third time in as many minutes. The ding-dong nature of this game continued with laverty for St.Johns and Devlin for the home team  exchanging points .

With the game poised at five points each St.Johns pulled Aishling Hawkins back from her perch on the edge of the square  to half forward and put Aimee Hesketh at full forward. This switch worked well as St.Johns took the next three scores with Eimhear Costello and  Hawkins firing powerful shots over the bar and Hesketh smashing home a goal from close range to leave a half time score of Tír na nÓg  0-05 St.Johns 1-07.

The second half saw no let up in the pace of this exciting game and as with the first half  it was an Aine Devlin free followed by a Caitlin McGaughey point from play which opened the scoring, bringing Tír na nÓg back into contention. St. johns goalkeeper Sinéad Lagan made a couple of fine saves and Emily Falloon was unlucky to hit the woodwork on two occasions. A burst of brilliance from  Aisling Hawkins soon changed the course of the game ,however, as she took three consecutive points to double St.Johns lead. Emily Falloon, a constant threat with her pace and quick thinking , pulled a point back for Tír na nÓg and Aine Devlin converted another free as the game reached a climax. St.Johns seemed to exhibit boundless energy with Simpson, Costello, Laverty and Leyden running hard at the home defence with every opportunity. They were rewarded with two successive goals as first Aimee Hesketh and then Faoileann Leyden found the net and following yet another expertly pointed free from Aine Devlin for Tír na nÓg, Maedhbh Laverty dropped a long distance free right in under the crossbar for a goal which clinched the game for St.Johns .Goalkeeper Aimee McAtamney was unsighted with the setting sun shining into her eyes and could do nothing. Falloon and Hawkins exchanged late points before Referee Vincent Boyle raised  the  whistle to his mud -splattered lips to finish the game. This was a victory thoroughly deserved by St. Johns with every player giving 100% effort throughout the game. Final score of Tír na nÓg 0-11 St.Johns 4-11