Senior camogs battle to the end 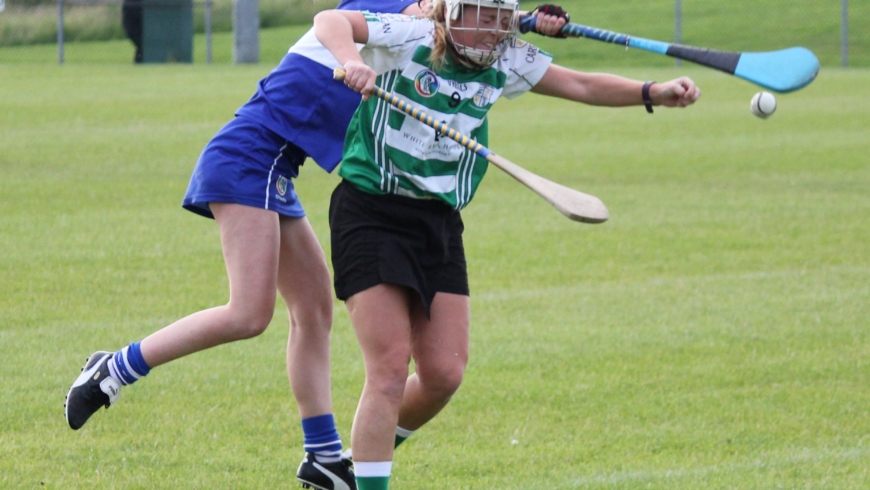 This was a comprehensive win for the home side who had also beaten St.Johns  in both league games this season but the Belfast camógs  who featured  only 5 of last seasons` Intermediate championship winning team and who were  only able to field 14 players , put up a spirited fight and contributed to the entertainment in this excellent , open game of camogie.

The scoring opened with Katie McAnenly taking a point from play followed by a free for Cargin but Maédhbh Laverty and Laura  Ferris  replied to square the game for the visitors . Cargin pushed on and three  McAnenly  frees and a goal from Sarah O’Boyle put them in a good position although a well taken Eimhear Costello point from play and two frees from Laverty kept St.Johns in the game until a two goal burst from Paula McCann and another from Una Cassidy appeared to wrap up the game for Cargin who led at half time by  4-07 to 0-05 leaving the visitors a mountain to climb.

St.Johns 14 players made a huge effort in the second half but with no substitutes to replace tired legs , the Corrigan  Park camógs fell to an inevitable 20 point defeat but their never-say-die attitude , particularly from the three  16  year olds  in their line up , will give them hope for next season. Second half goals from Eimhear Costello, Carrie Ann Williamson and Aileen Fox made for a rousing finish and with Helen Mead and Bridget Byrne covering a lot of ground in defence to support Maédhbh Laverty’s forward runs  the Naomh Eoin girls looked quite composed at times despite being without a manager ,following Paul Boyle’s departure last week.

Stand- in coaches Patrick  McBride and Cónal Morgan  did surprisingly well against the odds, but Cargin were able to bring on fresh legs and add more scores in the second half through another brace of goals from  Paula McCann and a series of points, the best of which came from Eleanor Mallon who was unlucky not to add a goal to her tally when St.Johns young goalie Leona Johnston made an outstanding save . Best for Cargin were their experienced backbone of Maureen Creelman, Eleanor Mallon, Cathy Carey , Katie McAnenly and the free scoring  McCann . They thoroughly deserved their victory and In fairness the Toome side look a good bet to push Loughgiel all the way in this years` Intermediate Championship. The game was very well refereed by Paul O’Neill  and  In tonight’s other Intermediate Championship game Ballycastle defeated Portglenone by 3-13 to 0-04.