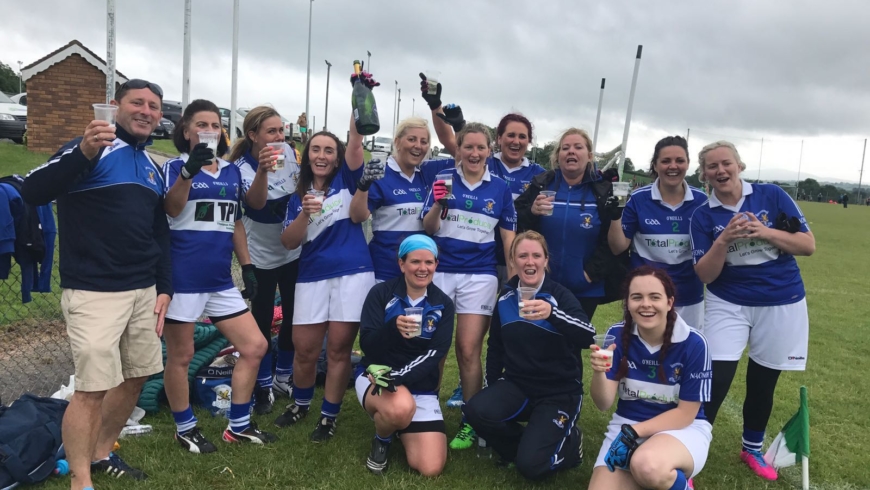 Saturday 1st July 2017, the date for this year’s Ulster Gaelic4Mothers and Others football Blitz.

It was early morning when our coach left Casement park to travel to host club Saval, in Newry Co Down, who had the honour and task of organising the event this year. The foundations for this wonderful day of football and fun had been laid in the preceding weeks with the expert organisation of Ciaran Murtagh, Ulster Ladies Development Officer and Anthony Crozier at the helm of Saval’s G4MO team.

Excitement and nerves were in the air as the St John’s panel, mentors and supporters arrived at the venue, looking forward to their day “out on the pitch”.

There were hellos among those that had in previous times togged out against each other, were friendships and camaraderie has grown on and off the pitch.

Wonder and anticipation was also in the air regarding who would we be playing and would we manage a few wins, even when we know fine well G4MO is non-competitive and there is no score keeping. Officially anyhow!

As “throw-in “beckoned, the girls went through their final preparations which included a number of visits to the ‘ladies’

The array of team colours and jerseys were a sight to behold .The black and amber of Glenn, red and white of Carrickcruppen and Aghaderg .St Brigid’s pink, blue and white. Forty shades of green including Saval and Drumragh or the Wolf Tone green and pink, Bosco blue and yellow . St John’s blue and white adding to the colour collage as every last player played their part, putting into practice the learning and skills developed in their training sessions back in Belfast.

First up was Drumragh and after a slow start the girls picked up the pace winning 0-5 to 0-2 and had their first win under their belts. A strong Carrickcruppen were up next and the girls gave it their all only to fall short at the final whistle. But with their heads held high the girls lined out against a tough Carryduff team and gave a tremendous team effort to win 3-2 to 0-2. The final game was against the group favourites Lissan. The girls left nothing in the tank as they won 1-0 to 0-2. The winning goal a spectacular individual effort straight from the training ground! St John’s had topped the group!

There were balls kicked high, balls kicked wide, ankles accidentally kicked when too much zealous applied. There was also wonderful high fielding, good skill and fitness levels and some spectacular points and goals the likes that Paddy McBride would have been proud to have been on the delivering end of. There was laughter and playful teasing of opponent in an effort to “put them off”, There was chatting and catching up for some when the ball was far pitch end. Everybody got a chance; everybody played a part, everyone’s contribution valued.

The panel of Catherine C, Emer, Deirdre, Jeannette, Jase, Kelly, Kim, Carol, Andrea, Nicola, Constance and Kerry can be very proud of themselves for the effort, fight and commitment displayed on the day. They were a credit to the blue and white of St John’s. A special word of thanks must also go to team mentors Aidan Darragh and Sharon Hughes.

A feast to match that delivered on the pitch welcomed one and all after the games. Opportunity to reflect on the day, the blitz itself and up and coming G4MO dates and occasions, new networks developed and promises of a friendly game in the coming months allowed all to further savour their individual team and club efforts and contribution.

This was “Our Day”

A day that demonstrates the qualities at the heart of Gaelic4Mothers &Others, fun, inclusive participation, social, learning new skills of our game, etc. Activity that gets such an enthusiastic mass of women involved in physical activity has benefits far reaching beyond the football out on the pitch. This day showcases just what a phenomenon G4MO in Ulster has become and is confirmation of its importance within the LGFA and GAA organisation.

May the G4MO’s initiative continue to grow, reaching out and involving those that wish to enjoy playing football and most importantly in integrating them as a valued and active part of their GAA Club and community.