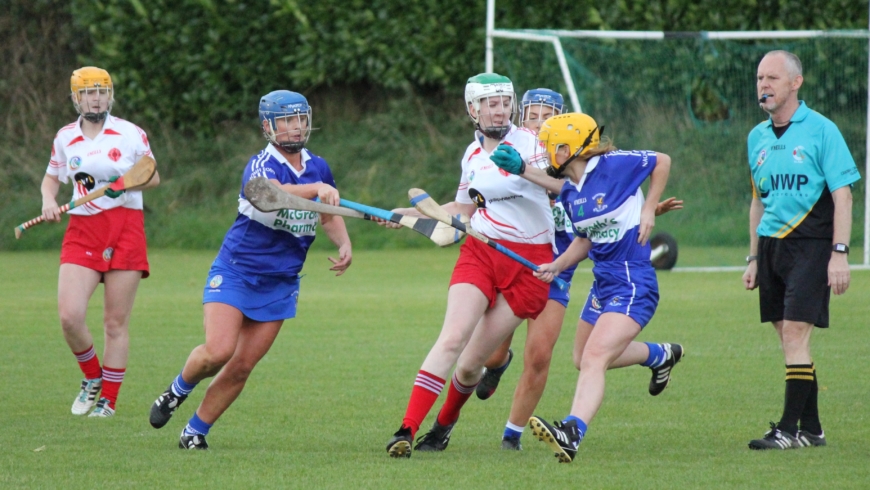 Photos and match report courtesy of Michael Costello…thanks for all the photos and reports throughout the year Michael!

Like last year’s corresponding fixture in which Loughgiel defeated Lacken by a single point ,this was a game which could have gone either way but in the end it took a sending off and a late goal to separate the two teams.

St.Johns took the first score with a free from Máire Mulholland but failed to build on that lead when a couple of other early opportunities were fired wide from good positions. The speedy Joanne Mullen equalised for the Armagh girls with what turned out to be Tullysaran’s only point scored from play in the entire game and they went ahead a short time later when Laoch na hImeartha (Player of the game) Collette McSorley converted the first of her placed ball scores.

St.Johns came back strongly and took two consecutive points from play via the hurls of Laverty and Mulholland but the complexion of the game changed completely in the 20th minute when St.Johns captain and chief playmaker Maédhbh Laverty suffered a nasty hand injury which reduced her to a token presence for the rest of the game. Tullysaran grasped their opportunity and the reliable Collette McSorley converted three frees in a row to give the Armagh camogs a two point lead. St.Johns rallied, however ,and Máire Mulholland took a fine point from play and then converted a free to leave a half time score of five points each.

The second half began with St.Johns experienced defender Aishling Hawkins putting over an impressive free from some 55 metres and this was quickly followed by another score from a Mulholland free. As the game developed Tullysaran were still the equal of the Belfast girls in a tight encounter and another burst of three frees were all put away by McSorley which gave the substantial Armagh supporters more to cheer about. St.Johns had the opportunity to level the game for the fifth time with a straightforward free from some 30 metres out but the sliotar was lashed off to the left in a vain attempt to set up a goal and the chance was wasted.

The game drew to a climax with some strong physical challenges from both sides and St.Johns Debbie Boyd was unfortunate enough to be sent off following a touchline shoving session involving players and mentors following a foul on Mulholland. Within a few moments the game was effectively over when Collette McSorley took her tally to 1-07 with a close range goal. Despite the frantic efforts of St.Johns in piling on more pressure and the late substitution of Córa Weir for Laverty, their only reply was an injury time Máire Mulholland point which proved to be insufficient to prevent Tullysaran from becoming this year’s Ulster Junior Champions.

St.Johns will look back with regret on a final in which they tried very hard to repeat their 2013 success ,but things simply didn’t go their way and they were badly affected by an injury and a sending off. Tullysaran can now look forward as Ulster champions to an All -Ireland semi-final spot but would need to resolve the glaring issue of their inability to take points from play and their over reliance on the McSorley placed ball factor which has got them this far. Final Score Tullysaran 1-08 St.Johns 0-08