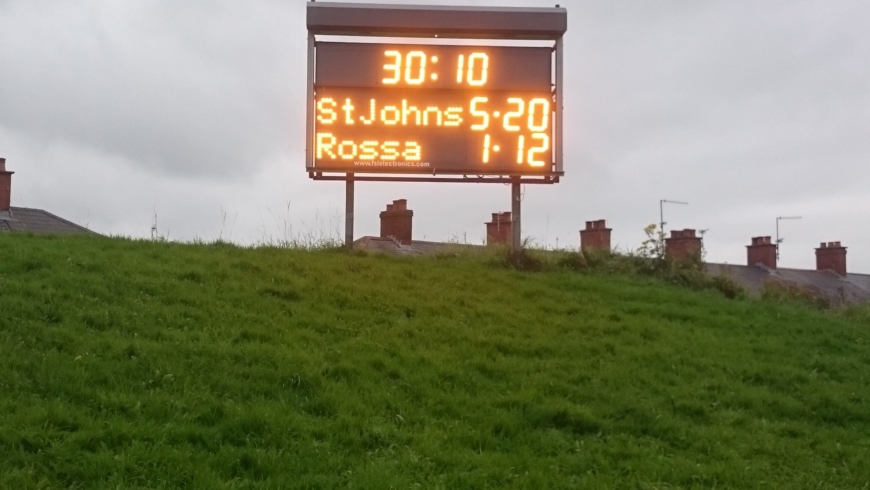 Naomh Eoin South Antrim hurlers finished the season in style on Saturday with a comprehensive and well-deserved win over Rossa at Corrigan, a result that means the league trophy stays in the Whiterock for another year.

With the average age reduced by the inclusion of a number of our outgoing minor team – something McFall, O’Neill and Moss were delighted with – the Johnnies lads managed to rack up total of 5-20 over the hour, with the Rossa challenge effectively ended by half-time.

Great performances all over the park from the McCallins, Shannon, McMahon, Heading and Maxwell.  Hanna and McBride (who knew Pat was this good a hurler!) ruled the roost at midfield, while the evergreen McFall, Moss and O’Neill tormented the Rossa rearguard throughout. Brian’s sideline ball score from 60 yards was a special bit of skill in itself – not too many can point a sideline on their knees!  Captain McGibbon did all the running to make the oul lads look good, ably supported by McKernan and Mullan when they entered the fray.

Francie in centre half was a colossus, Grievesy and Homer mopped up the lose ball, with big Joe Hand making good use of the tennis lessons administered by Chesney by giving the best display of one-handed hurling seen in a long time!

Simon in goal was safe as houses, coping with the limited Rossa opportunities with aplomb.

Captain Gibbies lifted the South Antrim Shield and gave an inspiration acceptance speech the like of which hasn’t been seen since Anthony Daly, Richard Stakelum and Joe McDonagh!