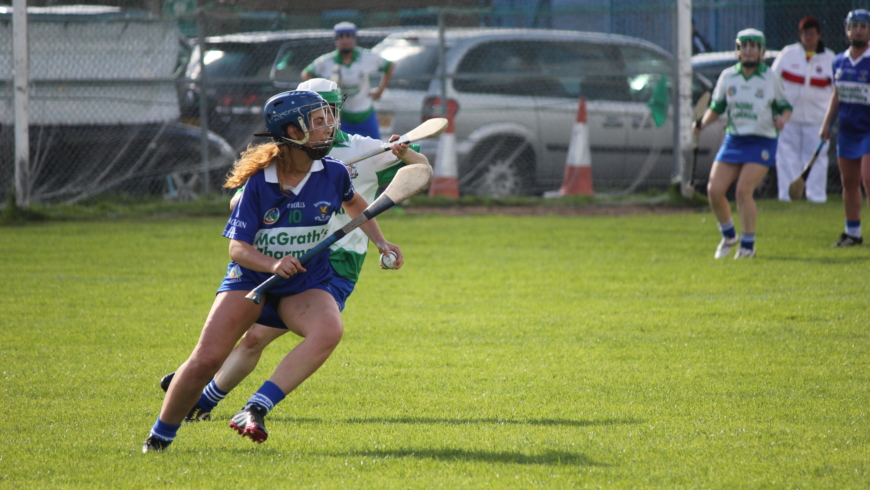 Ulster Camogie Junior  Quarter- Final – Johnnies back from the dead!

This game must surely go down as the comeback of the season in the Ulster championships. At half time St.Johns looked dead on their feet as a strong Derrylaughan side walked in with a lead of nine points ,but an inspirational half time pep talk from Manager Michael  Johnston led to an amazing second half transformation  with The Corrigan Park girls eventually winning by eight points and the Tyrone camógs failing to register even  a single second half score.

This was a very physical game from the throw-in and Referee Eamon Cassidy  of County Derry had his hands full with a lot of aggressive challenges taking place and at least four players being yellow carded during the course of the game. The first five scores of the game were from frees with Máire Mulholland of St. Johns converting a brace and Emma McAliskey of the Kevin Barry’s sending three placed balls over the bar. A very tight game turned in favour of the visitors half way through the first half when Derrylaughan took four  goals in succession  in a fifteen minute blitz with only three Mulholland points in reply for  St. John’s . Niamh Coney took advantage of some confusion in the St.Johns defence to tap home the first , quickly followed by Caoimhe Rafferty who beat the defence for pace to force the ball home. Former Down star Lisa McAliskey found the net next when the St.Johns goalkeeper Sinéad Lagan was blinded by the sun and failed to stop a high dropping puck. The fourth goal was a penalty converted by Emma McAliskey which St.Johns felt was a rather questionable  decision. The hard working Mulholland  took her sixth point of the game and her second from play for a shell shocked St.Johns side whose misery was compounded when Aishling Hawkins failed to convert a penalty awarded for a foul on Debbie Boyd just before the interval.

The second half saw St.Johns come out of the dressing rooms with a determined attitude and surge forward in an effort  to claw back the nine points separating  the teams. Máire Mulholland lashed home a free within a minute of the restart and Corrigan Park  came to life when  Maédhbh Laverty fired home a fine goal following good approach work by Nicole Kane. The excitement was palpable as Derrylaughan  failed to respond to the brave challenge of the Johnnies. Laverty tapped over a nice point from play and when Mulholland took the next two scores from  frees the comeback looked a sure bet. St.Johns brought on Córa Weir and the 17 year old who has averaged a goal a game this season didn’t disappoint. She latched on to a long ball from midfield , beat her marker and shot home from her left hand side drawing a mighty roar from the home support. St.Johns were now in the lead and never looked back. A demoralised Derrylaughan looked for inspiration to Oonagh O’Neill and Lisa McAliskey and both tried hard but the scoring spree continued for the girls in blue and white with two more frees converted by  the immaculate Mulholland and a point from play by Maédhbh Laverty. Aishling Hawkins fired a 45 over the bar and Helen Wilson scored a rare goal in great  style with a few minutes remaining to send Derrylaughan back home to Tyrone wondering what might have been. This was a great team effort by the Corrigan Park camógs illustrating the strength of character in their squad.  Final Score St.Johns 3-14 Derrylaughan 4-03 (St.Johns now play Castleblaney in the semi final after their 3-14 to 2-10 win over An Ríocht of County Down.)