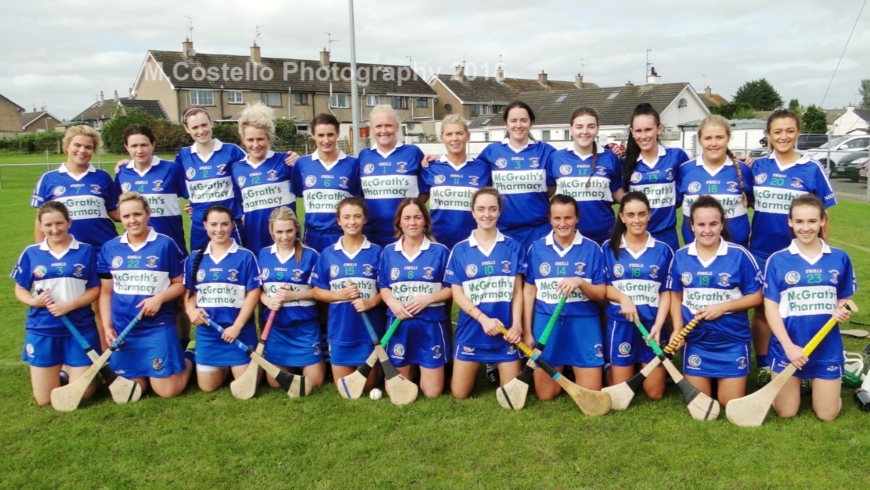 This was a close, physical contest played on a warm afternoon in front of a good crowd who enjoyed every minute of the action. Debbie Boyd of St.Johns opened the scoring with a neatly taken point from close range before the Shamrock’s Charley McCarry replied with a well placed free. The game was evenly balanced at this stage but Maédhbh laverty nudged St.Johns ahead with a delightful point before McCarry responded by converting another free.

Sustained pressure from St.Johns however resulted in a nicely taken goal by Boyd and this was soon followed by a Máire Mulholland point to give the girls from Corrigan Park a four point lead. Loughgiel surged forward in an attempt to get back into the game and managed three more points from frees , all expertly put away by Charley McCarry. Referee Vincent Boyle allowed the game to flow as much as possible and with McGuigan, McErlean and Fox of St.Johns all notable for their work rate, the Johnnies took the next couple of points via a Mulholland free and an unusual point by the indefatigable Carrie Ann Williamson was clipped over the bar from a recumbent position before Kirsty McKendry took Loughgiel’s first point from play to end the opening half on a score of St.Johns 1-05 Loughgiel 0-06.

The second half started with a big push from St.Johns and canny Johnnie’s coach Michael Johnston made a number of astute positional changes which rendered his defence almost impregnable throughout the remainder of the game with Loughgiel only managing a single second half score. County Veteran Aishling Hawkins mobilised her back lines very well and won the referee’s selection as ” Laoch na himeartha” at the final whistle.

Five unanswered points from the Corrigan Camógs, including a couple of Mulholland frees, two impressive long range Hawkins specials, and a great Laverty point from an almost impossible angle sealed the victory. Loughgiel , not wanting to give up the title they have held for the last two years ,fought to the bitter end with pride and conviction and took a late point through substitute Megan Boyle. But in the end this was a solid team performance from St.Johns with every girl playing her part in their well deserved victory.