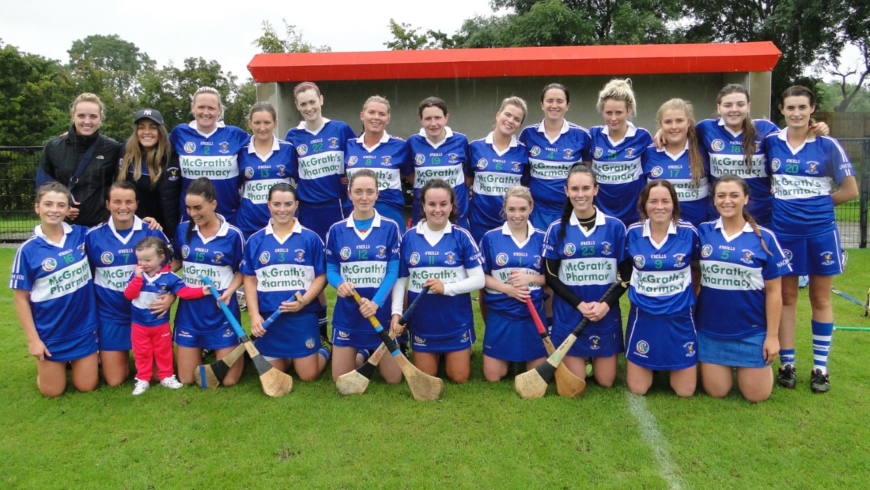 On a wet afternoon in Ahoghill ,St.Johns went through to the county Intermediate final ,but without the smooth transition that many expected. On a slippery pitch ,with a lot of girls losing their balance, St .Johns attacked from the throw-in and despite early opportunities wasted a number of chances. Aishling Jackson missed two straight-forward frees from some 20 metres out before Máire Mulholland opened the scoring for St.Johns with a free. Both Maédhbh Laverty and Eimhear Costello went close before Aishling Jackson in an uncustomary full forward role turned a high cross past Emma O’Neill into the net. Tír na nÓg fought back undaunted and made some deep surges into the Belfast team’s half and in a war of attrition managed to level the score by half time through 4 frees expertly converted by Áine Devlin who was impressive throughout the game.

With the scores level both teams had all to play for in the second half and battle recommenced. Sarah Jane McGuigan, Lauri McDermott and Úna Simpson were `stand-out ` players who fought hard for St.Johns and Bronagh Devlin, Emily Faloon and Shuana O’Neill were impressive for Tír na nÓg . The Randalstown girls eventually took the lead ten minutes into the second half with their first point of the game from play via Aimee McAtamney but their joy was short lived as Nicole Kane hammered home a close range goal for the Johnnies after a great run by Máire Mulholland. Emily Falloon converted a point a short time later to keep Tír na nÓg in the hunt but St. johns brought on fresh legs in the form of Debbie Boyd and Cora Weir to increase their attacking options and the game swung in their favour in the last 15 minutes as veteran St.Johns Goalkeeper Sinead Lagan brilliantly saved a Falloon Penalty and Máire Mulholland , comfortable as ever in an Antrim shirt, converted four consecutive frees without reply from Randalstown to leave a final score of St.Johns 2-05 Tír na nÓg 0-06.

This was a gripping semi-final where nerves got the better of a number of players and St.Johns now play Loughgiel in the Intermediate final on Sept 17th following the Shamrocks convincing 2-11 to 0-06 win over Creggan.