By conor Sun 15th May 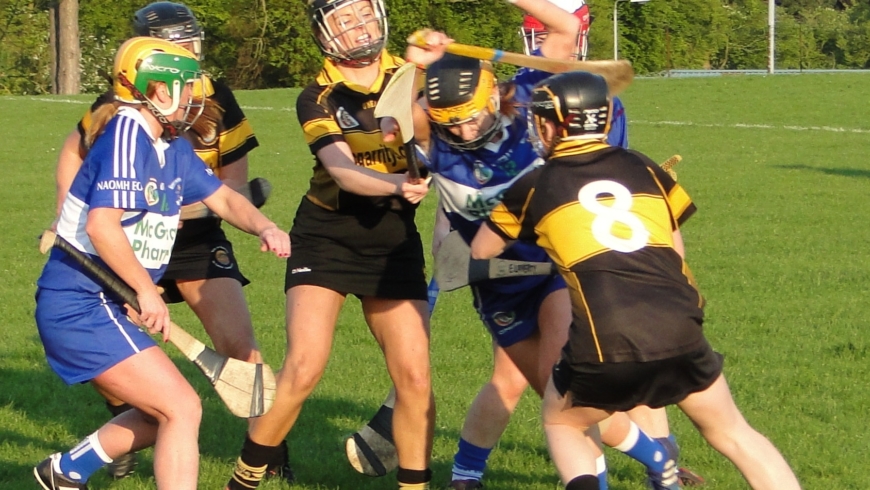 Ballycastle made the longest camogie trek in the county to the Falls Park to face a St. Johns team unbeaten so far this season and despite taking the first point of the night with a placed ball via Cathy Christie, it was all downhill after that for Joe Baldwin’s girls as the St. Johns camógs clicked into gear. Christie went very close to another points a few minutes later before  Eimhear Costello levelled the game with a free.  Naomh Eoin quickly took control of the game as Adrienne McCann  put  them ahead with a well executed point  before the irrepressible Maédhbh Laverty  showed her pace and shooting accuracy with three consecutive scores consisting of a point each side of a goal. The game developed into a tough physical battle and referee Adrian Kelly had his work cut out to keep order. The long grass made it difficult for players to lift the  sliotar easily and keep the game flowing so a number of `rucks` developed  resulting in a lot of physical challenges and tempers frayed in the heat. Emma Laverty, Clare Scullion and Niamh A.Donnelly  showed some nice touches of skill as Ballycastle went close to scoring a goal but the danger was averted  by the ever alert  Danielle Clarke-Jones  and  Aishling Jackson  before Adrienne McCann wound up the scoring for the first half with another point for St.Johns. Half time score Naomh Eoin 1-05 to 0-01

Naomh Eoin kept up the pressure in the second half and Laverty, Costello and Máire Mulholland all added impressive points from play. Ballycastle fought hard and  former Ulster Minor player of the year Tara O’Neill fired a fine goal past Sinéad Lagan to give the visitors hope. Their revival was short lived however as Eimhear Costello responded by  blasting  home a goal from a free some thirty metres out and then added a point following a nice solo run. Maédhbh laverty performed the coup-de-grace a few moments later with a well worked goal  to leave a final score of St.Johns 3-09 Ballycastle 1-01. Under the inspiring  leadership of Michael Johnston St.Johns have now won 5 out of 5 league games and lead the division two table.