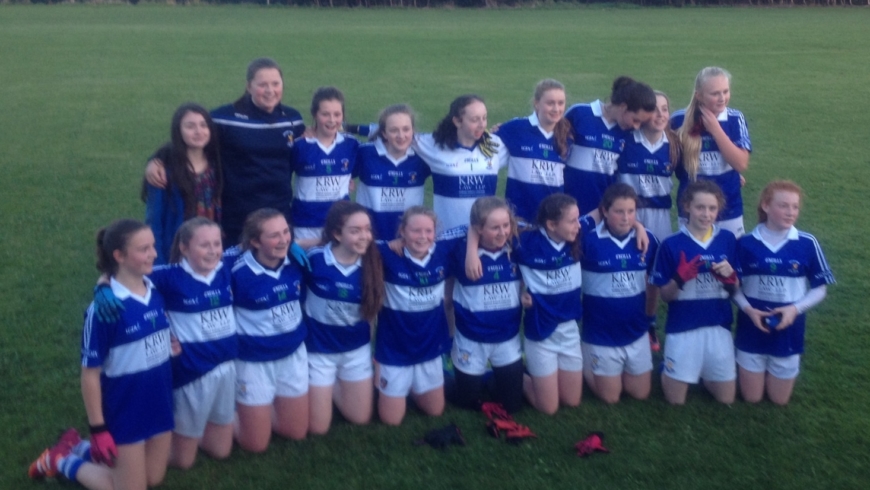 Congratulations to Naomh Eoin U14 Ladies on winning their league in only their second year of formation.

The girls season started in January with a winter league which was a real test of character for the squad playing in the freezing cold. The league campaign proper saw the girls challenge nine other teams ( some long established ), They finished unbeaten and played some outstanding football winning a lot of admiration from opponents for their commitment and style of football all year.

The back line played a significant role this year and the whole panel were used to ensure that everyone in the squad played their part. Maedbh Fennell has made great strides this year since taking up her role as goalkeeper. The defenders of Niamh Hamill, Siantelle Boyd ,Niamh Mc Ardle, Ceara Carleton, Anna McCaffrey and Claire Mc Connell have been impenetrable keeping opposition team scores to a minimum.
Katie Connolly & Carol Browne have both shown great improvement in their pace and skill and have been very effective moving forward and directing play from the centre.
Throughout the year the forward line has changed according to the opposition with everyone playing their part. Aifa Gough , Rebecca Crummey & Natasha Clarke have had an outstanding season with great scores coming from great free flowing play and from dead ball situations. Ana Rosbotham, Eireann Boyd , Clodagh Mc Curdy, Eimear Carson, Sadbh Thompson, Marie Therese O’Rourke and Banbha Mc Curdy have all racked up some excellent scores and their pace and movement around the forward line has been a joy to watch.

These young people and their parents have given a huge commitment to the club this year many of them playing in both codes in school and club as well as other sports and it is to their credit that they have done so with enthusiasm and without complaint. Well done ladies on what has been an excellent season for the club. Your commitment and hard work has paid off .

A special mention also to the U16 ladies team who in their first year of formation came runners up in their league and were narrowly defeated in the championship final going in as underdogs to the eventual league and championship winners.

Thank you to Laura, Martin & Andy who looked after the girls this year and a special thanks to the parents for all their support and dedication.
NEA