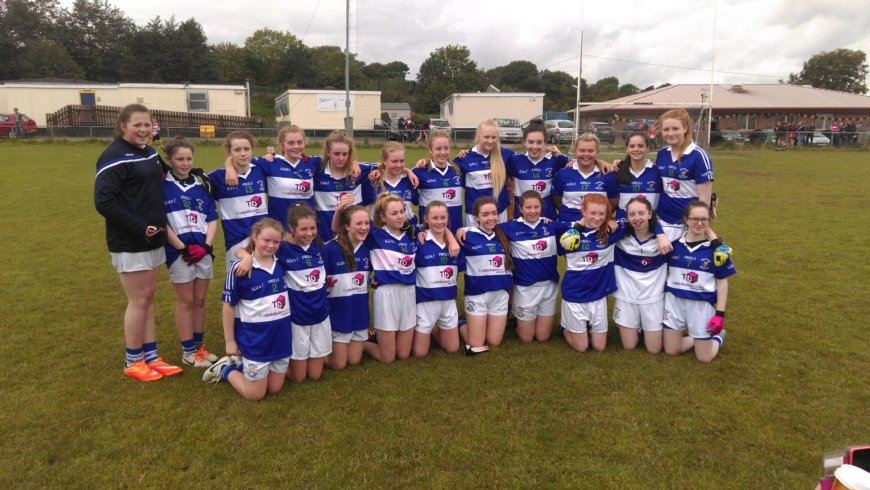 Commiserations to the girls  on their defeat  today in  the U16b Championship final against St Enda’s.

Both teams put on a brilliant display of football and it was a great advertisement for ladies football.

The Naomh Eoin girls narrowly missed  out by a 3 point margin.

The girls entered into the final as massive underdogs due to suffering heavy defeats in their two previous games against St Enda’s but came out with a new belief in themselves on the back of 3  straight wins in Championship  & League.

The game started with great passion from both teams and St Enda’s  soon got a couple of scores to settle themselves but the Naomh Eoin Backline of Niamh Hamill, Aine Mc Parland, Ceara Carleton ,Siantelle Boyde  & Aibh Mc Geogh fought ferociously  in the back line with great tackling to keep them at bay.  the  half back line of Katie Connolly & Katie Boyd were brilliantly  holding the wave of attack from St Enda’s.

Naomh Eoin Keeper Maedbh  Fennell  was getting  good accuracy & distance  with her kick outs and was soon finding midfeilders Carole Browne & Clare Morgan who were then on the attack and pressing the St Enda’s back line, Rebecca Crummey  kicked a long ball into the forward line and Natasha seized on it and found the St Enda’s net. This score seemed to input new belief into the Naomh Eoin girls and they upped their game  and took the game to St Enda’s.

When the game restarted Naomh Eoin girls came out flying and displayed the best football we have witnessed them playing all year.

They totally dominated the second half with great fire and belief.

From the throw in Naomh Eoin pressed forward and got a great point from Natasha  Clarke and then kept pressing St Enda’s   half back line with Naomh Eoin Half forwards Anna Rothbothom , Cliodhna Mc Caffrey & Aifa Gough  displaying great awareness in passing and movement  soon started to run St Enda’s ragged. Naomh Eoin scored another  unanswered point and this new impetuous had the  Naomh Eoin Girls ,Mentors & Supporters thinking we can win this.St Enda’s got back into the game and got 2 long range points but the Naomh Eoin girls didn’t drop their heads and mounted another attack with Nora Sullivan crossing ball in for Natasha to score a great goal…Then Naomh Eoin Made an “impact” substitution and brought on young Eireann Boyd who caused havoc in the forward line racking up a personal tally of 1-3.  The Naomh Eoin girls limited St Enda’s to just 2 more points in the remainder of the second half but time was against them and  they could not manage to complete the comeback..

This is the first year that the Club has entered an u16 ladies football  team and the girls  finished up runners up in the league & narrowly beaten in Championship final . Not  too bad considering 6 of the team are u15 , 2  u12 and the rest of the panel u14.

The Management and Mentors – Kevin,Benny Andy & Martin wish to thank the girls team for great commitment & dedication  throughout the year and to say that it was an honour working with you and that you are all great ambassadors for the club and ladies Football.

A massive thank you to the parents for their  continuous support throughout the year and TDS for sponsorship of team kit.