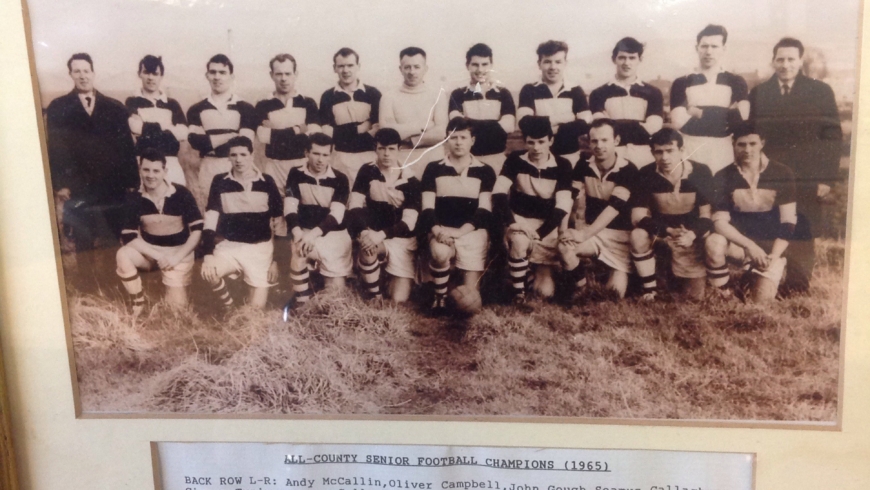 St. Johns V Glen Top Four Tournament final.
Michael McCrory (better known as Micky), played Senior Football with distinction for both St John’s and Antrim in the 1960’s. Micky, by his own admission, has been somewhat of a globetrotter. Now having reached the ripe old age of 70, he has for some time been living in sunny California. He has made contact with the club, and has shared his memories of a special time in the history of our club. I’m sure that all who read Micky’s account, will enjoy the humour and affection with which the words are written.

Writing from sun soaked Newport Beach California about my Saint John’s club football days. The first great football team I was ever privileged to play for was the St. Johns Minor (under 18) team in the years 1960, 1961 and 1962.
For those two years we won every game and tournament we played in, bar none. Our captain and most dominant player in the entire league was young Micky Gallagher. If the ball was in the air anywhere near our end of the field forget about it, it was Micky’s ball. If he didn’t get the ball he’d get you, then he’d get the ball. He never played anything but a great game. All the rest of us had to do to win was score some points, i.e. if he wasn’t scoring them himself. It was the most fun time of my short career. A happy, stimulating bunch we were. I still smile at the memory in the dressing room afterwards, when one of our least talented players would shout out for all to hear: ” Hey Micky, you played great today – how did I play?” Or when, leaning over to fill the second leg in your pants, someone would shout “Catch” as a full glass bottle of coke came flying your way. The next best team I was privileged to play for, in any sport, was the St. Johns Senior team, with true leader and captain, Seamus Gallagher, alongside ALL the Gallagher brothers, and my own brother and star player Gerry Mc Crory – Gerard to me.
What made us great I think (Seven Senior Football Championships in a row, I only played in games 3, 4, 5 and 6), was that even when our more talented players were off their game, rare as that was, there was always some less gifted player (such as John Gough- ha!), whose gutsy play would raise us all up with either heroic goal-keeping or a never-say-die goal at a key moment.
But more memorable for me than any of those championship wins was the unique, and much heralded game against the powerful County Down GLEN team in the first ever Top Four Tournament final, held at Corrigan Park. We knew we were in for the test of our lives.The tournament was the brainchild of Andy McCallin senior, the very backbone of the club. Thanks to his vision it developed into the very successful All Ireland Club Championship with the (then lowly) St. Gall’s club now making us all proud with their great play all across the land.
Maybe if the Antrim selectors had selected the entire St. Gall’s team the county would have won something by now, fifty years on. Back in the 1960’s the All Ireland Football Champions Down were, for me, the best ever and the most exciting team in all of Ireland – save maybe for the great Kerry teams.
Paddy Doherty and Sean O’Neill were a deadly combination worth a certain ten points, between them, every game. Coming from such a ‘cock-of-the-walk’ county as Down, the Glen players then had every reason to feel confident of beating us in the final, but it was not to be. As I recall it, we trounced them, and all of County Down came to know of the St. John’s club. Not that it wasn’t close, it was, with the unstoppable tank-like James McCartan crashing in his typically two great goals, and that with having half the St. Johns defence seemingly all over him. I do recall that John Gough or maybe it was one of the Gallagher brothers played McCartan as well as anyone ever had played him before. That made the difference against a man used to winning games all on his own. The other key factor being that every single time they got their tails up with stirring play and scores we would hit back with goals and points of our own. Before the largest crowd ever it was great entertainment. I recall too, though being closely marked, scoring a point or two from the right corner flag. That too must have taken some of the wind from their sails. Every St. John’s man did himself proud that day in a very sporting game.
Oliver Campbell: I can still see him sything his way down the field, Seamus Gallagher style, seemingly oblivious to all the clinging hands and bodies around him. Inspired play! It was like he was thinking: ” If Seamus Gallagher can do this nearly every game, TODAY, so can I.” And he did so splendidly. That was the day and game were we, as a team, knew we had arrived. No other game sticks out in my memory like that one. Not even any of my County games, helped, no doubt, by the fact that my own mother is a County Down, Kilcoo/Castlewellan girl. As children, Gerard, myself and our sisters spent all our summer vacations playing there under the shadow of the beautiful Mourne Mountains- the very roads and fields that the great St. Patrick himself walked. So thanks for the memories you guys, both living and dead. I am now a healthy seventy, thank God. What a great sense of pride I have in having known and played with you, not forgetting all you great Sarsfields, Pearses and Rossa opponents who tested us every game. I still thank God for you all and pray for you often, especially the deceased.
The saying is:
“Man lives on earth but yearns for heaven”

Hope to see you all again there some day, God willing.
You can tell me YOUR favorite memories.