By conor Thu 28th May 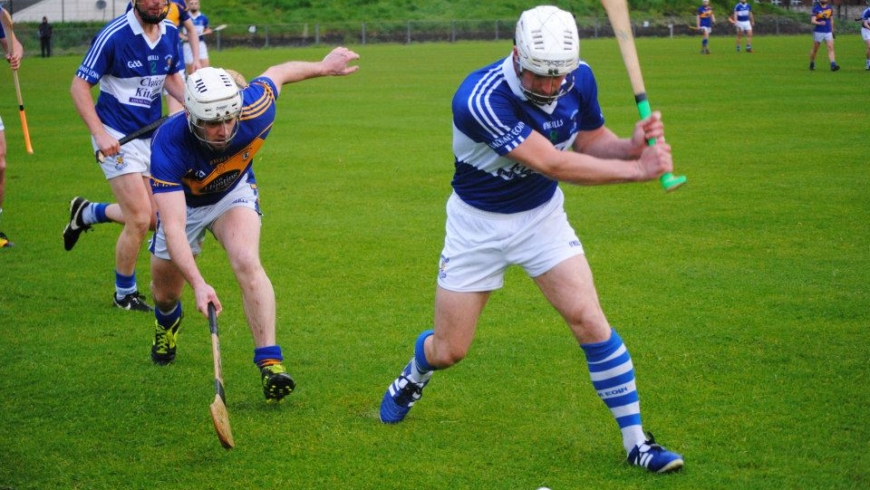 The senior hurlers got back to winning ways last night with a very comfortable win over our old rivals Rossa on a score line of 1.16 to 1.4, this certainly didn’t flatter us as we were superior all over the field from numbers  1 – 15 and even the subs made telling contributions from the very first minute.  We got off to a great start with points from Michael Bradley, Donal Carson, the evergreen Brian McFall and Jimmy Peoples in the opening minutes.

The dominance of Barry McFall and Ciaran Johnston at midfield gave us a great platform as we attacked relentlessly in the wet and greasy conditions.  There was an endless supply of quality ball into the forwards when the strength of Big Shea Curran and speed of Donal Carson caused the Rossa defence no end of  problems.

Shea goes for the catch

Unfortunately we had quite a few wides but were comfortably leading 0.6 to 0.1 when on one of Rossa’s rare attacks they scrambled a goal to cut the difference to 2.  However the Johnnies lads responded well and hit two great points from Michael Bradley and Shea to stretch the lead to 4 at half time, 0.8 to 1.1.

The swirling breeze was to favour Rossa in the second half and also they were playing into the car park end but we need not have worried as the game was effectively put to bed from the restart.  The second half began in a whirl wind with the Johnnies boys hitting 1.4 in the space of 5 mins without reply, with the goal coming from the ever present Jimmy Peoples who was in the right place at the right time to drill the ball to the back of the Rossa net.

The Child and the Cat!

The points came from Simon McCrory, Michael Bradley, Brian McFall and Ciaran Johnston.  At this stage the writing was on the wall for Rossa and there was no way back.  The half back line of McFall, Nugent and Moran repelled every Rossa attack and on the rare occasion when they managed to breach that line, Cutt, Doolies and Big Gerard stuffed out the light weight Rossa full forward line with considerable ease.

Simon in goals was safe under the high ball and delivered some excellent clearances when called upon.  Frustration boiled over for Rossa and they lost their corner back for a wild pull mid-way through the second half.  St. Johns continued to tag on the points with the pick coming from Locky McCurdy after a great pass from wee Gibbies.

This was a great overall team performance and would certainly have cheered manager Neal Peden who is recovering in hospital after knee surgery.  It would be unfair to single anybody out as everyman gave a great account of themselves but the strength, aggression and dominance of Ciaran, Simon, Domhnall and Barry around the middle was a major factor in a last night’s win.

special mention must go out to the veteran  Brian ‘Jimmy’ McFall who answered the call and returned from semi-retirement to lead the line and gave the younger lads the benefit of his many years experience,  even if he did put the last ball into Springhill!