U14 Camogs win Feile B

By Andy Mon 25th May 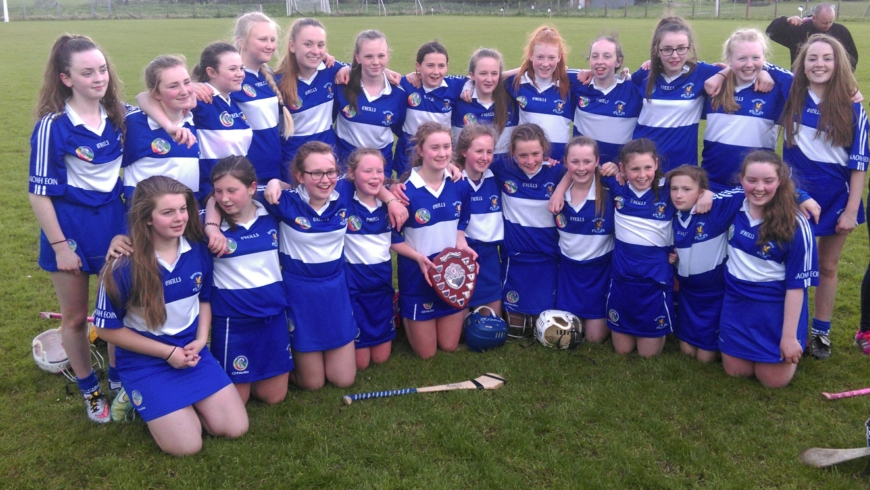 Congratulations to the Naomh Eoin Camogs on winning the Feile B Championship, beating Ahoghill by 5-5 to 1-1  at a cold and windy Slemish Park on Sunday evening.

From the moment the ball was thrown in both teams fought hard for possession with the Naomh Eoin coming out on top with some great tackling and movement off the ball. The back line of Leona, Katie Devlin and Maedbh provided good cover for Sophie in goal, whilst the half back line of Aideen and Siantelle played outstandingly,  preventing the Ahoghill forward attacking the goals.

Claire and Ceara fought hard in midfield and soon came out on top with a great display of defending and attacking play.
The half forward line of Katie Connolly and Niamh Hamill got some great scores, with Niamh hitting some cracking scores from frees.

The Forward line of Eireann,Eimear And Chloe all helped out with great play and scores.  As Naomh Eoin started to take control of the game the introduction of Anna, Natasha, Aifa, Clodagh, Kate, Sadbh and other members of the panel helped put the game beyond Ahoghill and the team deservedly won what was a great game for the travelling support to watch and a great display of skill put on by both teams.