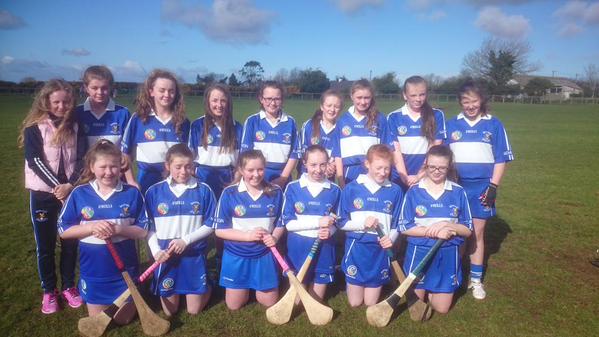 Another busy weekend for Johnnies teams in league and championship action.  Friday night saw the U12 girls footballers visit Sarsfields, sharing the spoils after some end-to-end action.  the heart and determination of this team, the majority of which are still U10, was a credit to coach Kevin and Benny!

Next up on Saturday, most of the same squad headed up to Naomh Pol for the go-games, once again putting in great displays against St Gall’s, St Brigid’s and the hosts.  Credit to the girls and their mentors for keeping the spectators warm with their displays…it was woolly hat weather!

Next up was the Boys U10 trip to Creggan.  Windy, Darren, Ciaran and Conor has this group playing some great stuff and they came home with the wins and performances they have trained so hard for.

Naomh Eoin U10 lads with their Creggan friends

Also on Saturday, we hosted Rossa in the U12 and U14 camogie league games.  the U12s were unlucky to lose to the visitors but, once again, the run out will do the girls good – a lot of U10s in this panel too.  The U14s were too strong for the Rossa girls, running out winners on a scoreline of 5-7 to 2-0.

U10 camogs at their go-games in woodlands on Sunday

The same sides met again in their Feile opener on Sunday night.  This was a much tighter affair with both sides holding the upper hand at different stages of the game.  The spectators were kept on the edge of their seats right up to the final whistle though, with the decisive point coming from Eireann Boyd to get us over the line 2-2 to 1-4.  Credit to both teams for serving up a very exciting game and well done to the Naomh Eoin girls for their double over the old enemy!

Earlier on Sunday the U8/U10s were out again, this time in Woodlands for the camogie go-games.  More brilliant performances from the girls considering the amount of games they had been involved in over the weekend.  Jase and Carol had the girls fighting for every ball and the girls can’t wait for the next blitz.

The victorious Feile team after their earlier outing to Creggan.

Sunday afternoon saw our Senior and reserve footballers face Portglenone in the league.  The reserve team set the tone for the day with an emphatic victory, the mix of old and new gelling perfectly to dispatch the opposition with 6 points to spare.

The seniors once again showed their potential against a strong Casements side.  their work rate and tackling illustrates the amount of work they have put under Eddie and Locky, winning multiple turnovers throughout the game.   Another 3 goals enabled us to build a lead the opposition were unlikely to match and the lads ran out winners 3-13 to 0-10.  Next up for us is a trip to Milltown on Wednesday night for games at 6.45 and 8pm.

Lastly on Sunday night, the senior ladies suffered their first defeat of their league campaign against an experienced St Paul’s team.  In fairness, the number of football and camogie games played in the last few weeks caught up with our girls and they’ll be looking forward to a bit of a break before their next game to recharge the batteries…after the senior camogie game on Tuesday in Corrigan against Cushendall that is!