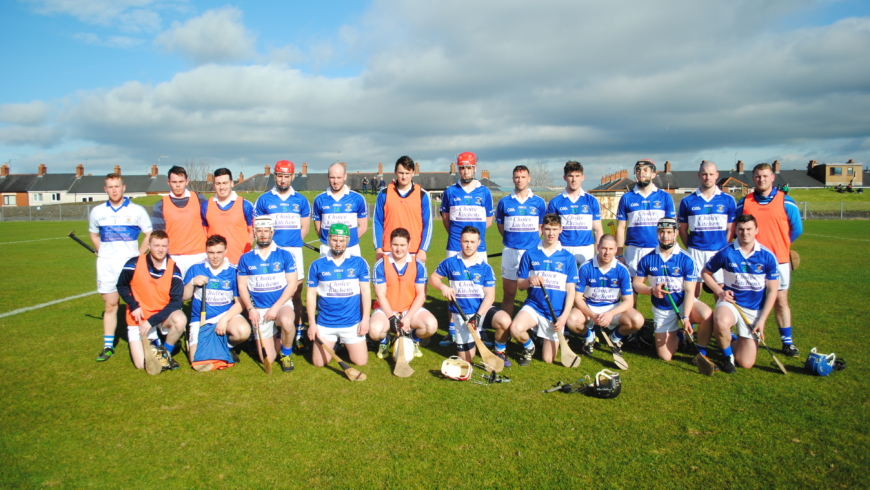 Our senior hurling league campaign of 2015 kicked off with a much improved performance from the last time these two sides met, with 6 points separating the sides and a final score was 3.19 to 1.19 to the visitors.

Although Loughuile were comfortable throughout, going in at half time 11 points in front 2.12 to 0.7, the Naomh Eoin lads we showed great character and a much better second half performance saw us cut the deficit to 5 at one stage. We were also unlucky to have a fine individual goal from Conor Johnston chalked off rather dubiously by the referee, who overall had a fine game. Had this stood, we could have been in for a grandstand finish as the young Johnnies side were certainly in the ascendancy at this stage!. Overall though, Loughuile more than merited their win keping us at arm’s length for much of the game.

The management and players should take heart from a sterling second half performance and some excellent point taking from all over the park, in particular, from Michael Bradley, Conor Johnston, Colm McFall, Domhnall Nugent and Michal Dudley. Barry McFall chipped in with some nice scores and gave a fine display of high catching too throughout the hour. The defence also battled hard throughout with Simon McCrory and Jimmy Peoples limiting Loughuile to just 1.7 in the second half.

A score of 1.19 would win you most matches and we hit 9 wides as well. Michael Bradley with 1.9 and Conor Johnston 0.5 were our top scorers and most dangerous outlet throughout the game. We now look forward to our next outing v Clooney Gaels at Corrigan this Sunday 12th April 3.30pm with renewed optimism and a great opportunity to get our first league points for 2015 on the board.