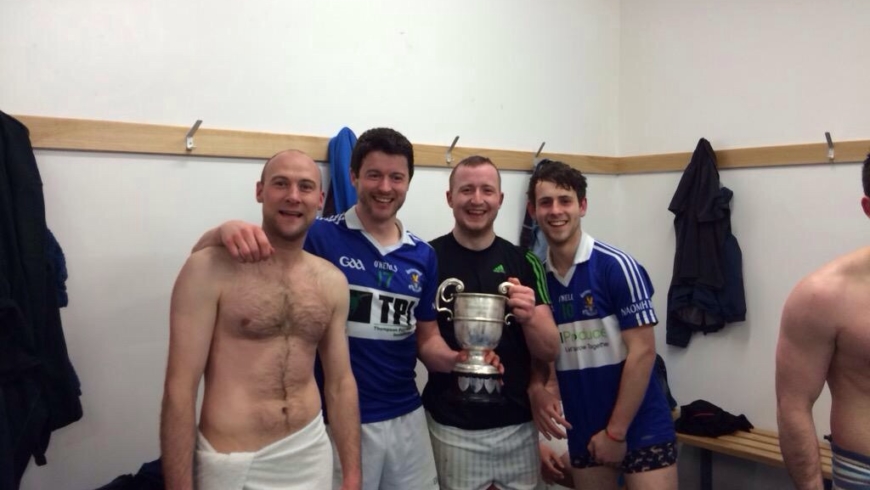 Well done to the Beringer Cup squad  – or football development squad:) – on their victory in Sunday’s final against a fancied St Gall’s side.  The margin of victory certainly didn’t flatter the lads.  The blend of gritty experience and youthful exuberance produced a brand of football that was a pleasure to watch at times!

Hopefully the first of many trophies heading our way in 2015.  Sunday was definitely a busy day at the club…

It would be an understatement to say it was a busy day at Corrigan Park yesterday. Preparations for the County Football game began very early in the day. There was a record crowd taking part in the ‘Fit-4-Life’ programme between 10.00 and 11.00am.

It was a pity that the rain that had threatened all morning finally arrived as the Antrim game started and pelted down on the spectators and players alike throughout the first half. The Chatterbox and the new shop over near the scoreboard proved very popular throughout the day. A big thanks to all members who were able to help out. Antrim did manage to win the game and now face Offaly in the final league game with the possibility of promotion still in their own hands.

There was more to come though when our footballers beat a fancied St Gall’s team on a scoreline 3.10 to 0.7 to win the Beringer Cup, so we’ll done to players and management. As if that wasn’t enough, the first meeting of the 30 ‘Strictly St John’s’ dancers took place in the club rooms. I’m sure there will be more about this in the weeks and months ahead.

That’s about it, although I’m sure the footballers stayed on at the club to celebrate a very good win,